The Love Story to End All Love Stories: Why the Queen’s Death Heralds Her Greatest Journey Yet “He has, quite simply, been my strength and stay all these years, and I, and his whole family, and this and many other countries, over him a debt greater than he would ever claim, or we shall ever know”

In many ways, Queen Elizabeth and Prince Philip were an unlikely pair. They first met at Britannia Royal Naval College in 1939, where an 18-year-old cadet Philip was introduced to a 13-year-old Princess Elizabeth of England while she was touring the grounds. From then, it’s said, the young royal never thought of anybody else.

The two began to exchange letters throughout the war years. While Elizabeth’s character is captured by typically British epithets like ‘understated’, dignified’ and ‘stoic’, in many ways Prince Philip was anything but. ‘It’s a vast waste of space’, Philip said, entertaining guests in 2000 at the reception of a new £18m British Embassy in Berlin, which the Queen had just opened.

Known as the King of the faux pas, Philip was a cheeky chappy ready to inject mischief into any exchange, no matter how risqué. But though they were superficially as different as night and day, this was a love affair to end all love affairs. As different as they were similar, this is what made them so perfect for each other — he was the yin to her yang — what one had, the other didn’t — and vice versa. Where she was measured and impartial, he was expressive and provocative. Where she was understatedly British, he was more European in his heart-lead, impassioned self-expression that caught people off guard, disarming formality with wit and fun.

As Elizabeth Gilbert, the bestselling author of Eat, Pray, Love, reminds us: ‘People think a soul mate is your perfect fit, and that’s what everyone wants. But a true soul mate is a mirror, the person who shows you everything that is holding you back, the person who brings you to your own attention so you can change your life’.

It’s impossible to celebrate the Queen without recognizing the powerful union that underpinned her magnificent sovereignty — and the enormously significant role she felt her right hand man played during her remarkable 70 year reign.

For brilliantly handsome and silly as he was, his charisma and quips belied incisive wit and integrity, just as Queen Elizabeth’s stability and impartiality belied her intelligence and power.

This was a one of a kind power couple, with Queen Elizabeth’s right hand man being far more than a devastatingly handsome seaman who swept her off her feet. Despite being the consummate man’s man, Philip gave up a prestigious career in the Royal Navy to assume the role of Queen’s Consort, subjugating himself to support her reign over 32 sovereign states during her reign of 70 years and 214 days, the longest of any British monarch and the longest recorded of any female head of state in history.

He was a man of serious honour, parking his ego in the way that only true men can, to support his remarkable other half to carry out a life of duty of service.

And though this may seem more of a tribute to Phillip than Queen Elizabeth herself, I’m not sure she would have wanted it any other way.

This was a man who cherished his Queen so deeply that he movingly orchestrated his own funeral to end with the National Anthem ‘God Save the Queen’, rendered all the more poignant as she sat alone in her pew in the midst of the pandemic, with only a black mask for company.

So while the Queen’s passing has been immeasurably sad for the British people, it’s also been a moment of great poignancy and comfort for the romantics amongst us: a moment which we are told brought her much comfort — when she would be reunited with the man she described on their golden wedding anniversary in 1997 as: ‘My strength and stay all these years’.

So as we mourn the loss of the inimitable, one of a kind figurehead that was Queen Elizabeth, let us celebrate one of her most longed for, treasured moments: the reconciliation with the man she counted as so critical to her happiness and success as a monarch.

For as Marianne Williamson reminds us in her powerful memoir, A Return To Love, those of us who find divine love are truly blessed, for it is the highest form of love that transcends all others and raises us up to everything we can be: 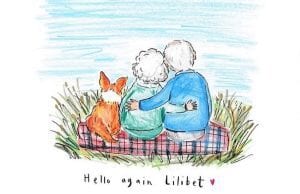